Can You Run An Online Business Without Facebook? I Tried—Here’s What Happened. 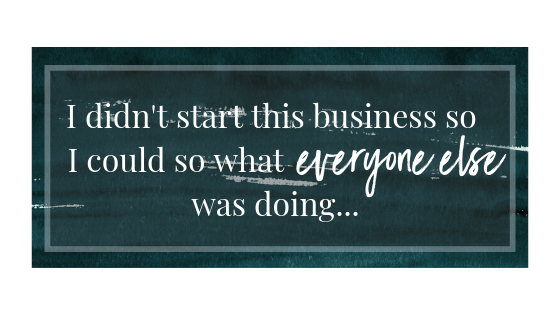 Alright, listen. This isn’t going to be an analytical think piece about the future of Facebook, and what it means for online marketing. There are plenty of cocky marketing gurus that can explain that to you—and I am neither cocky nor a guru.

If I were a “regular person,” (as in, not a business owner) I would have deleted that shit years ago and never looked back.

But I AM a business owner, and my business lives exclusively on the Internet, and running an online business without a Facebook account is like climbing Mount Everest without a sherpa—you might be able to do it, but your chances of reaching the summit would be drastically reduced, and it’d be really stupid to even try, and also you’d probably die.

But here’s the thing, y’all—

I didn’t start my business so I could do what everyone else was doing. If I cared about things like best practices and fallback plans and safety nets, I’d be counting my fat tax refund while sipping spritzes on a paid vacation and dreaming up reasons to visit the doctor, because health insurance.

And this is the supreme irony of Internet marketing culture.

We reject the safety (and the grind) of gainful employment because we’re rebels and innovators and (gag) disruptors. But instead of trusting the instincts that got us here in the first place, we immediately do what the gurus, experts, influencers tell us to do, because we’re afraid to crash and burn.

We’re looking for ways to hedge our bets, and all those tried-and-true templates and blueprints feel like safety.

And just like that, we go from rebels to sheep.

At best, it’s an unproductive timesuck. And at worst, it’s derailing elections and giving a platform to white supremacists and the alt-right.

On top of that, Mark Zuckerberg is exactly the kind of person I DON’T care to support: an entitled white male who’s been allowed to get away with being a complete dick just because he invented something a lot of people find useful. (See also: Steve Jobs. See also: another rant I think you’ll really enjoy.)

When I started my online business, I set up a Facebook page because you know, that’s How It’s Done.

But for the next three years it just sat there, untouched.

I wanted to delete it altogether, but I thought I had to keep it for my business. So I did—but I didn’t do any of the things I would’ve needed it for in the first place, like running ads or starting a group in my niche, or being on Instagram.

I was playing by the rules and rebelling against the rules, at the same time.

So after three years of forcing my own instincts and values to play second chair, I kicked over the conductor’s podium, stole his stupid baton, and led the orchestra in a little composition I like to call, “Zuck on This!”

I listened patiently while people explained that deleting Facebook wouldn’t necessarily keep my data safe. (It was never about the data. We’re all already screwed in that department, Facebook or not.)

I caught shit from friends who made sure to point out that Facebook also owns Instagram and What’s App. (Yep, I know that. But you gotta start somewhere. And at least Instagram isn’t spreading fake news or handing elections to the Russians.)

I took some precautions to make sure I wouldn’t lose any old content, and hit that Delete button so hard. (See A Few Things to Consider if You Want to Delete Facebook for more info).

I let my business coach know, and a few other people who might miss me, but I didn’t make a huge deal out of it. I just like, left.

Like how climbers on Everest feel once the oxygen deprivation starts to set in.

Like I did on the day I got fired.

I’m not going to lie, it was fucking great.

I didn’t miss it when my work colleagues referenced an intense discussion going on in one of my former business groups.

I didn’t miss it when my best friend threw a(nother) Caftans & Cocktails party, and had to text me the details, and I couldn’t see any pictures of Liz Taylor wearing a caftan. 🙁

I didn’t even miss it when another close friend was rushed to the hospital and later diagnosed with brain cancer, and I helped set him up with a meal train and fundraising efforts. (All of that would have certainly been easier with a Facebook account, but none of it was impossible. It’s called email, people.)

At the end of the day, I made it about three months before I had to wave the white flag.

It wasn’t a disaster, where I couldn’t find out if my loved ones were okay, or let them know that I was.

It was something that had never crossed my mind, or come up in any of the conversations I had about deleting Facebook—and yet, it’s a crucial, non-negotiable piece of how I run my business:

I’d forgotten about the background checks.

When I opted out of Facebook, I’d been riding on a steady stream of quality referrals and long-term retainer clients. I hadn’t fielded a cold inquiry in over a year.

I have some pretty tight guidelines around who my ideal clients are. I work with  women-owned businesses, and/or businesses that serve underrepresented populations, and/or support social justice. I’m not a copywriter who uses a bunch of flashy tactics and manipulative language. I’m not here to help a male marketing guru sell a $10,000 course to other marketing gurus, under the guise of “making the world a better place.”

Before I can make the decision to work with someone, I need to know who they follow and admire. If it’s all Tony Robbins and Ryan Deiss, well… those clients aren’t going to like me very much (unless they’re specifically hiring me to “de-bro” their brand, which is always fun).

And if their profile (or their friends’ profiles) are peppered with confederate flags or some racist / sexist / anti-choice bullshit, I’m super not interested. A terrible fit all around.

Referrals, they come pre-screened. They’re already vouched for, by the person doing the referring.

But cold inquires—people who find you online and contact you through your website or DM’s—they could be ANYONE.

You gotta vet that shit.

And that right there, is how Zuckerberg got me.

When I reinstated my account, I made my personal profile super bare bones. I turned off tagging, and set up every possible restriction. You can’t post on my page, wish me happy birthday, post photos of me, etc.

My business page is just copied and pasted language from my website, and auto-posted content from Instagram. Notice how I didn’t add a hyperlink to subtly send you over there.

I wish things were different, you guys.

But at least I tried.

And in a subtle act of rebellion, the birthday on my profile is fake as hell.

And my fake birthday makes me older, not younger, because fuck the patriarchy.

A Few Things To Consider if You Want to Delete Facebook…

You can download pretty much your whole Facebook life, including photos, comments, and posts, which I recommend doing just in case. It takes a little while but it’s worth it, especially if you’ve had a lot of business-related convos you’d like to keep.

There is a 30-day waiting period before your account is actually deleted. If you log in at any point during that time, your account will be reactivated. I put a reminder on my calendar and made sure not to go anywhere near the platform (not hard).

You’ll have to set up new login info for all the websites you’ve logged into with your Facebook account. I recommend doing this BEFORE you delete Facebook, to avoid any disruption in your workflow. You can find a mostly-complete list of these third-party sites from Settings > Apps and Websites.

If you decide to wave the white flag like I did, it’s a good idea to repopulate your friends, at least a little bit, so they don’t think you’re a bot. You’ll have to let your friends know it’s really you though—they’ll think your account got hacked

You know all those ex bosses and ne’er do-well’s you blocked before? Yeah… you’ll have to find them and re-block them all over again. This is a real pain in the ass. (But consider this: if you’re not posting anything on your Facebook page, you have that many fewer reasons to block people.)

I’ll leave you with this, just for fun…