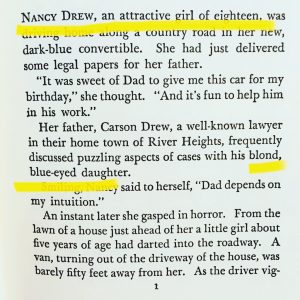 Sooo… I’m rereading one of my childhood staples, the very first Nancy Drew Mystery. I read every single book in every iteration of the series, and while I never consciously felt inferior to Ms. Drew, I definitely internalized some important gender expectations, namely: Blond hair & blue eyes are better than brown hair & brown eyes. Girls with brown hair and brown eyes are the nerdy, quirky, sidekick friend, not the main character, and they don’t have boyfriends either. (Sidebar: ever notice how Nancy, her boyfriend Ned, and her BFF “George” are eerily similar to Daphne, Fred, and Velma from Scooby Doo? Discuss.)

I’ve been toying with the idea of rewriting this book, not just because I want to take out all the references to her appearance (which are plentiful) but also because, let’s be honest, this writing is baaaaad. What if I reinvented Nancy Drew for the modern age? What would she be like? Who would her friends be? What kind of car would she drive? And maybe her mysteries could like, affect social change or something. I put it to you, dear reader: has anyone tried this before? Is this a cool idea, or a lame one? Me and my Armenian eyebrows are just not blond enough to know the answer.