The Priory of the Orange Tree by Samantha Shannon 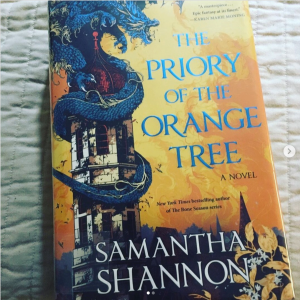 What makes a #feministfantasy feminist? It’s not just b/c there are female heroes. This is a world with classism, wealth disparity, and religious absolutism (also, no free speech). AND, it’s *not* a patriarchy. The wedding ceremonies are about companions & fellowship, not subservience. There are platonic friendships between women and men. The women are flawed and have blind spots, just like any male hero in a non-feminist fantasy. .
It’s easy to rail against the patriarchy, but not so easy to imagine what the world would be like without it. Would we just replace all the men that hold positions of power & privilege with women? No—that would still be a patriarchal society. Would toppling the patriarchy solve all our problems? No—we’d still have a lot of them.

The Priory of the Orange Tree follows 4 different characters in different parts of the world, as they come to the end of a 1,000-year period of dragon-free peace. (There are good dragons and bad dragons; the bad ones are coming back, and they make Drogon look like a kittykat. Also, they talk.)

This was a very readable book, with great pacing and short-ish chapters. The world building and imagery were on point, especially in the burnt draconian country that used to be full of lavender fields. I didn’t love how the maps were drawn, though, and this took me out of the story a lot.

Sometimes, the storytelling felt a bit simplistic / predictable /underdeveloped to me, but it still worked because the character of Ead was SUCH an endless badass.

If you like witches, dragons, badass women, non-problematic male characters, and aren’t too nitpicky about the maps, I think you’ll like this one.