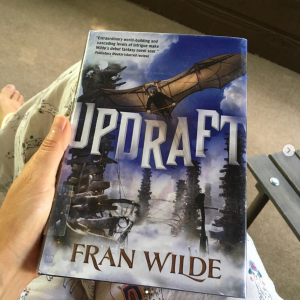 Fran Wilde’s Updraft tells the story of a city in the sky, populated by humans who live in towers of bone—living, growing, pulsing bone that can be coaxed into new growth by the Singers, the city’s mystical-yet-menacing spiritual leaders. ⠀⠀⠀⠀⠀⠀⠀⠀

Citizens fly around on wings of silk and bone. They’re governed by strict, singsongy Laws, which keep the towers isolated from each other (and under the Singers’ thumbs). It’s a harsh, punishing culture—and that’s if you don’t get eaten by one of those invisible flying-squid things… ⠀

⠀⠀⠀⠀⠀⠀⠀⠀
When I set out to write this review, I noticed a lot of critics taking points away for a predictable story and characters that felt flat. ⠀⠀⠀⠀

⠀⠀⠀⠀⠀
The story IS predictable—I had the major beats pegged pretty early on—but it didn’t affect my enjoyment of the book one bit.
⠀⠀⠀⠀⠀⠀⠀⠀⠀
Maybe that’s because I’m not a critic. Maybe it’s because the only YA fantasy I’ve ever read was The Hunger Games.
Maybe it’s because I was predisposed to like this book, because (disclosure) I met Fran Wilde at a writing conference, and she was funny and smart and she made fun of GoT, and her worldbuilding seminars were packed with nerdy fun & helpful exercises.
⠀⠀⠀⠀⠀⠀⠀⠀⠀
Wilde’s prose is rhythmic, poetic, propulsive. The beats of language echo the beating of wings; the pacing evokes the immediacy of air currents and gusts of wind. The worldbuilding gave me vertigo. And damn—you’re chucked right into the action as soon as you open the thing.
⠀⠀⠀⠀⠀⠀⠀⠀⠀
I loved the detailed mechanics of flying, of wing construction, and of tower architecture… but I have LOTS of unanswered questions about how this world came to be, and what’s down below, under the clouds. (There are 2 sequels to this book, so maybe I’ll find out).