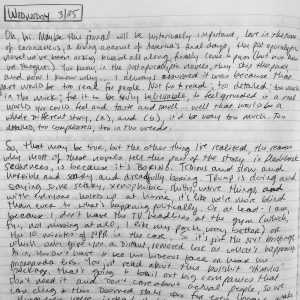 “I always assumed it was because that part would be too real for people. Not fun to read; […] too much in the muck for it to be truly *believable,* to feel grounded in a real world you could feel & taste & smell… well that would be a whole different story, (a), and (b), it’d be way too much. Too detailed, too complicated, too in the weeds.

“So, that may be true, but the other thing I’ve realized, the reason why most of these novels tell this part of the story in flashback sequences, is because it’s BORING. Tedious and slow and horrible and scary and dreadfully boring. Trump is doing & saying some scary, xenophobic, shitty, untrue things, and w/everyone hold up at home, it’s like we’re more blind than ever to what’s happening politically. Or at least‚ I am, b/c I don’t have the TV headlines at the gym (which, fyi, I’m not missing at all, I like my porch way better) or the 10 minutes of NPR in the car.

“So it’s just the NYT briefings, which only give you a distant, removed look at what’s happening. As in, you don’t have to see his hideous face or hear his propaganda lies. You just read about this bullshit “stimulus” package, that’s going to bail out big companies that don’t need it and don’t care about actual people, so we can cling to this doomed status quo for even LONGER, make things even WORSE, instead of taking this opportunity to change things. Hit pause, reevaluate […] Matthew says this is the nail in Trump’s coffin… but he was just as confident about that when the pussy grabbing tape was released, wasn’t he? And look what happened.”