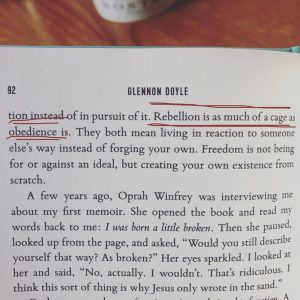 “Rebellion is as much of a cage as obedience is.”

Isn’t it crazy how— ⠀⠀⠀⠀⠀⠀⠀⠀⠀
…an idea enters your consciousness in a particular way, at a particular time, articulated by a particular person
⠀⠀⠀⠀⠀⠀⠀⠀⠀
… and it breaks something open in your brain
⠀⠀⠀⠀⠀⠀⠀⠀⠀
… it’s not that it’s new, or that you never thought about it before, it’s more like something you already knew but just didn’t have the words for
⠀⠀⠀⠀⠀⠀⠀⠀⠀
… like in Super Mario 3 when you can see all the different levels you have to go to in a world, but they’re all blurred out until you unlock them
⠀⠀⠀⠀⠀⠀⠀⠀⠀
… and THEN, once your brain is broken open, and you can’t ever imagine not knowing this thing, it doesn’t ever occur to you to separate that from the circumstances and people that first introduced it to you
⠀⠀⠀⠀⠀⠀⠀⠀⠀
… *until* you hear someone else, someone totally unrelated, in a totally different time and place, SAY THE SAME EXACT FUCKING THING but in different words
⠀⠀⠀⠀⠀⠀⠀⠀⠀
Isn’t that crazy?
⠀⠀⠀⠀⠀⠀⠀⠀⠀
“What if, instead of trying to redraw the lines, we rejected the idea of lines altogether?”
⠀⠀⠀⠀⠀⠀⠀⠀⠀
Carmen Cool and I hashed out this concept for her updated website copy, and it’s stuck with me ever since. ⠀⠀⠀⠀⠀⠀⠀⠀⠀
The idea being that whether you’re obeying or rebelling, your life is still ruled by the either/or, the binary, the line. Rebelling against the rules means your life is still defined by the rules. ⠀⠀⠀⠀⠀⠀⠀⠀⠀
And as a card carrying, self-identified rebel (against diet culture, patriarchy, against The Man, against 2.5 kids and a picket fence, against conformity) ⠀⠀⠀⠀⠀⠀⠀⠀⠀
…this hit home. It changed me; it’s changing me.
⠀⠀⠀⠀⠀⠀⠀⠀⠀
Then, like four months later, I come across this passage in Glennon Doyle’s new memoir, Untamed (maybe you’ve heard of it).
⠀⠀⠀⠀⠀⠀⠀⠀⠀
Whoa, dudes. 😎