White is for Witching by Helen Oyeyemi 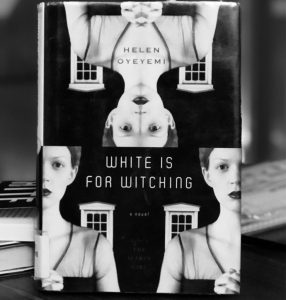 Ummmmm, this book was WEIRD, y’all.

It’s about an evil house(?). It’s about hunger and consumption and intergenerational trauma. It’s about a girl —Miranda—who eats chalk instead of food (she has pica), and also it’s about immigration. Kind of.

Because Miranda is essentially starving herself to death (and sees ghosts, and may or may not also be possessed / already dead) she slips in and out of consciousness and/or reality a lot. It’s a very dreamy, slow, nightmarish vibe.

The POV alternates between Miranda & the people closest to her… and, the house. The house has its own 1st person POV.

It’s pretty hard to get your arms around the actual layout of this house, as well as just what in the royal fuck is going on here in general. If I had to pick one word to describe it, I’d say, “disorienting.”

I always enjoy a book that kinda fucks with me a lil bit. Oyeyemi creates a whole MOOD here, and I’m 100% planning on devouring everything else she’s ever written. (see what I did there? yeah you do.)

One thing that was interesting to notice (and this does not reflect great on me but that’s kind of why I’m sharing it), was the whole presumption-of-whiteness thing. That’s when the author doesn’t specify skin color, UNLESS the character in question is non-white (i.e. describing someone as black, but not describing someone as white).

Helen Oyeyemi, who is black, used that device—she didn’t outright say her main characters were white, but it was kind of implied, and I pieced it together by other descriptors, like Miranda’s pale skin. However—the black characters are outright described as black, in their very first scenes.

I’m not proud to say that *I* went into this with a low-key assumption that the main characters were black, because the author is black. AND THIS IS WHY #decolonizeyourbookshelf IS A THING.