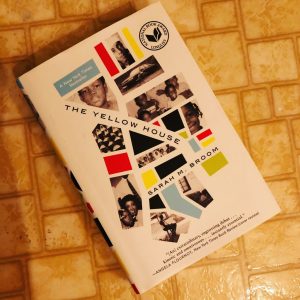 So this book was on my list for like 6 months, and then I had a hard time finding it, and THEN it sat on my shelf for nearly a year, because I was planning to read it in preparation for a trip to New Orleans which got canceled due to COVID.

And… I’m so glad I finally picked it up.

The Yellow House is a memoir about growing up in New Orleans East.

But what it’s *really* about is HOME.

What is a home? Is it a house? A neighborhood? The people around you? (Yes, all of the above.)

But what happens when you move away from home—when you move halfway around the world to carve out an identity of your own—and while you’re gone, your home gets washed away, your family scattered to the four corners of the country, some never to return?

In The Yellow House, Sarah M. Broom attempts to tackle these questions and tell her family’s story—while also shedding light on the numerous, multi-faceted, insidious ways that New Orleans’ Black population was utterly failed by its government, both before AND after Katrina, in so many ways. It’s beautifully, lyrically written, and (I just realized this) the changing rhythms are like water—at times a meandering, muddy river; at times a rushing torrent. I’ve seen some critics taking issue with the slow parts, but looking at it this way, the rhythmic changes feel just right (and totally intentional).

I recommend reading this one for real—not the audiobook. (There’s pictures.)