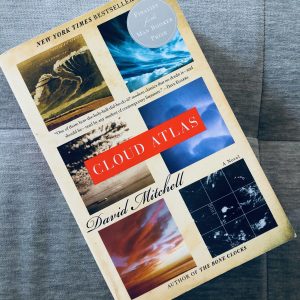 A quick Reddit search reveals that someone wrote their *entire* college thesis on David Mitchell’s Cloud Atlas. I mean, damn.

Reading this book feels like an achievement, along the lines of Infinite Jest (but much better than that). I’ve always had the impression that Cloud Atlas was a really challenging, looong book with several different stories that fit together like Russian nesting dolls.

And it is—all of those things. You start in the 1800s and vignette your way through a few different plotlines into some distant unnamed future, then back again the way you came. Each character discovers or has some relationship with the previous character’s thread—except the final future segment, which is like the apex of a pyramid.

I could see how one might roll one’s eyes at this structure, like it’s gimmicky. One of the characters even makes a meta-reference to this critique, as if to defend himself in advance.

But *I* thought it was masterful. When I finished I just sat there in awe at what this writer was able to achieve. I was seethingly jealous and wide-eyed wowed at the same time—and if you’re a writer too, you know exactly what I’m talking about. 😫

The themes Mitchell is going after here are 🤯🤯🤯. Here’s a quick stab at them:

~~The fucked-up effects of colonization & consumerism~~

Cloud Atlas is both speculative AND historical fiction (wild! I know), so you get a look back at the origins of these intertwined phenomena, AND a glimpse into a dystopian future that is its natural endpoint (aka, humanity’s fall).

~~Our responsibility as ancestors / the power of empathy~~

See passage in the 2nd photo. 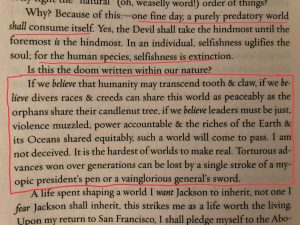 I don’t know, y’all. This is debatable, and I’m on team No Reincarnation. I think the connection between each of the main characters is more symbolic than literal. But go to the Reddit book discussion if you want to lose an afternoon.

Verdict? Challenging, in the best way. Still deciding whether or not I’ll rewatch the Wachowski movie.