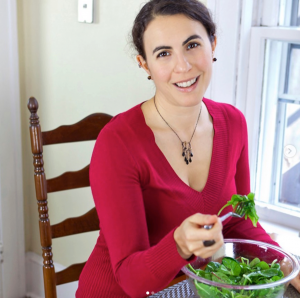 This photo was taken in 2012, when I was deep in the (White) wellness & personal development world, immersed in the fatphobic, thin-obsessed, patriarchal doctrine that permeates so much of these fitness & nutrition spaces.

(I was also well on my way to a “Clean Eating” inspired eating disorder, which was furthered by the “education” and trainings I was receiving at the time.)

This photo was taken for my ill-fated health coaching practice. I was already resisting the toxic positivity of this world (although I didn’t have the language for it back then), and the insidiousness & hypocrisy of “mindset gaslighting” was not lost on me, either.

But since no one else seemed to be talking about any of that, I thought it was just me. I played along.

THIS was what I thought I had to be in order to “succeed.”

For the past year or so, I’ve been grappling with the harm that was done to me, and the harm that I unwittingly did to others, during my time in the fitness / wellness industry…

…AND in my early copywriting days, working for (or with) paternalistic, misogynistic, gaslight-y men, and buying into the language of empowerment that was & is used to get women to oppress themselves.

It’s a lot, and I’ve been hesitant to talk about it publicly. 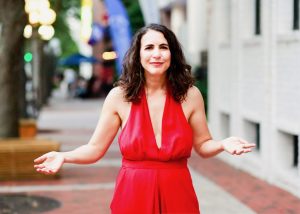 This 2nd photo is from 2018, after I’d been writing professionally for 3 years.

Before the shoot, I researched poses & privilege, so I could exude strength & badassery without perpetuating the

male gaze or patriarchal standards of beauty (s/o to Kelly Diels for her tips on this).

It’s a lot closer to the real me—big hair, what-the-fuck.