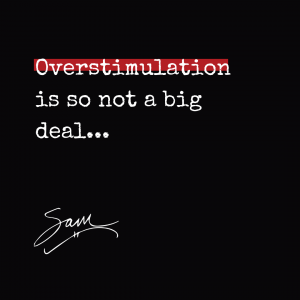 SPS (Sensory Processing Sensitivity) is a genetic trait—you either have it or you don’t. But watching people emerge from a year of social distancing and isolation, I’ve observed many non-HSPs describing a level of sensitivity that wasn’t necessarily there before.

They’re going to a restaurant for the first time in over a year, and everything is overwhelming—the lights, the fans, the background noise, the overlapping conversations… all amplified by the nervousness and anxiety we ALL feel as we tentatively experiment with being around strangers again, eating food that someone else cooked, breathing air other people have breathed.

In a way it’s like the pandemic gave non-HSPs an opportunity to *actually feel* what it’s like to be overstimulated.

So much of that—the noises, the fans, etc.— was already on our radar before the pandemic, right? That shit is just a normal day in the life of an HSP. And yet, historically it’s been pretty hard to convey that to our non-HSP friends, especially in a way that doesn’t provoke some sort of misinterpretation or judgement (i.e. being seen as high maintenance, too picky, difficult to work with, what have you).

A year of isolation has given them a singular opportunity to feel what it feels like to be Highly Sensitive, even if they do not carry that trait themselves.

The problem is that most of the time, they’re experiencing this as a negative. Something unpleasant.

And so, instead of bridging the understanding gap, we could be WIDENING it. 🙁 Overstimulation is not always a negative experience, nor does it always *arise* from a negative experience. I’m in a chronic state of overstimulation this month because I’ve been getting up at the ass-crack of dawn every day to plunk out 1000+ words, and it’s lighting me up so my brain is kind of wired for the rest of the day. The overstimulation part doesn’t feel great, because it’s affecting my sleep and my brain can’t calm down—but the thing that CAUSED the overstimulation (writing) is amazing, and great. The opposite of unpleasant.