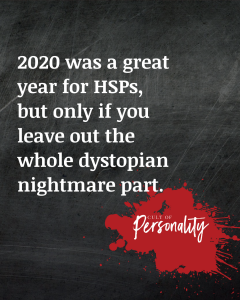 As we prepare to have the Most Turnt Summer Ever, let’s not forget what we just lived through, y’all.

For the past several weeks I’ve been geeking out on how everyone is responding to society’s reopening differently. I find it so fascinating; I want to talk about it with you for 14 hours.

Even me—I’m a walking contradiction. I’ve been going around saying how NICE it was to have a break in 2020—how a year without travel or a million weekend plans was actually super restorative and calming for my brain, because so many of the “HSP” things were removed, they were universally agreed upon, they were a given. I didn’t have to say no to anyone, but I still didn’t have to do the things.

It’s funny because it totally skips over the part where my entire routine dissolved into a haze of late mornings, halfhearted exercise attempts, and lots of potato chips. It’s funny because I was a fucking wreck for the first, like, eight months (don’t forget we had an election in 2020; don’t forget Black Lives Matter; don’t forget the attempted coup on the Capitol building)…

In summation, 2020 was a great year for HSPs, but only if you leave out the whole dystopian nightmare part.