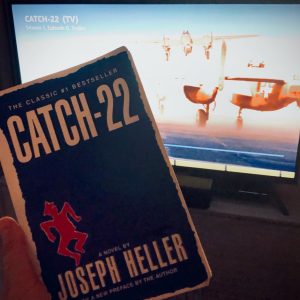 Let’s take a break from all the bullshit to talk about something fun. (Don’t worry, I’ll be back on my bullshit next time.)

**What are your favorite film / tv adaptations?**

I loooooove books. Actual, physical books I have to lug around town with me. And, I love movies and television.

I’m pretty forgiving about book-to-screen adaptations, because it’s a different medium, and mostly I’m too interested in the adaptation process itself to get too judgy about it. (Except The Dark Tower adaptation. That shit sucked.)

I recently saw the trailer for the new Dune movie, and it looks SO FREAKING COOL, I can’t wait, and bonus! I recently read it for the first time a couple years ago, so I’m fully prepped. 🙂

A few of my favorite adaptations*

*I’m only counting it if I both read the book AND watched the movie. I’m sure Alias Grace is an amazing adaptation, but I haven’t read the book so I can’t say.

Also, notice Game of Thrones is absent from this list. First two seasons were great, casting was great, books are way better, finale sucked, I’m over the whole situation.

Update: I’m looking at some lists online, and there are some really excellent shows / films that were adapted from books I’ve never read. The Leftovers; Nomadland; Killing Eve; Sharp Objects; Lovecraft Country… guess I need to hit up Goodreads. 📚🤓

Also, controversial opinion: I prefer watching the movie / show first and THEN reading the book. A movie won’t ruin a book, but a book can ruin a movie. Change my mind >>