“Charge What You’re Worth” Hypocrisy 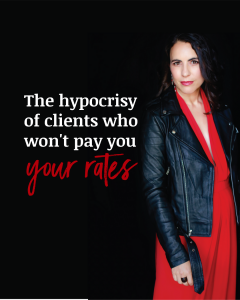 Yup. I’m back on my bullshit, calling out the hypocritical way certain business owners* are treating their freelance service providers.

You have these big names—recognizable, internet-famous entrepreneurs telling everyone & their mother to charge what they’re worth. And when you land your first big-name client, you think—

“Finally, I’m going to get paid my rates without a fight! This person CLEARLY GETS IT.”

But behind the scenes, these companies are often not the anti-corporate, self-care-obsessed utopias they make themselves out to be. 🤨

When you tell them your rates, they don’t wanna pay ‘em. They want the most work possible for the least amount of money. They try to talk you out of important pieces of your process. They tell you “it isn’t that much work,” even though they have no idea how much work it is for you.

Meanwhile, they’re out here teaching their followers to value themselves and charge premium rates for the work that they do.

But the only way you can CHARGE those rates, is if people actually PAY those rates. And it’s a real mindfuck / gut punch to watch your client post their revenue achievements online, while behind the scenes they’re fighting your rate increase tooth & nail.

I think this happens because of (surprise) the hierarchical model of patriarchal, capitalist business structures. When you’re at the top, it’s easy to view the people you pay for services as somehow beneath you, not on a level. You’re paying them to do a thing you don’t want to do.

Then there’s that thing where people don’t think of freelance service providers as “business owners” in their own right, which is absolute BS.

We also have distorted expectations around what we should be earning and charging, and who is “deserving” of our services based on what they can & can’t afford. I’m considering an alternative to the existing service-for-hire model that I think is pretty radical… more coming soon.

She publishes frequent essays on feminism, privilege, pop culture, entrepreneurship, the creative process, and more on her website, cultofpersonality.co. She currently lives in Asheville, NC, and while she can *technically* work from anywhere, she prefers her adventures laptop-free.

It’s not easy being green… But it IS easy to

It’s fun to complain about the annoying things o

Clients looooove being told what to do. I first

oh hi. I wanted to share some of the tech, tools,