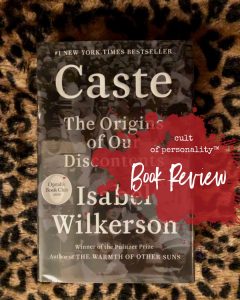 This book gave me a lot to think about. It was on just about every ‘Best of 2020’ list I came across, and it took MONTHS to get it from my local library—and now that I’ve finished it, I understand why. It’s definitely going to be on my ‘Best of 2021’ list.

I honestly don’t even know where to start; this is the kind of post that makes me glad I don’t review books for a living. Buuuut… here it is. The core concept of this book is that America is a caste system, much like the Indian caste system, or like the caste system that sprung up and quickly took over in Germany 1929.

Many scholars have studied the caste system in India, and many have studied Nazi Germany. And a few have studied America from this lens… but until now, no one has set all three of them side by side to analyze their similarities and differences, and create a framework for understanding how caste plays out in nearly every aspect of our lives, from politics to education to social interactions, and so on.

In short, Caste does a better job of explaining the inequities in this country, the voting habits of certain wh*te people (ahem, you know who I mean), and what we’re really up against as we seek justice and change, than race / racism does.

This is not the feel-good hit of the summer. Wilkerson is unrelenting in her depictions of chattel slavery, Jim Crow, and how horrifically Black Americans have been treated for CENTURIES. (Did you know that in the history of this country, slavery was legal for longer than it’s been illegal? Fuck.)

It’s a rough read, but it’s also gripping and thought provoking and—this is key—leaves you with a whole new way to think about systemic racism and what we as members of the dominant caste can do to create real change.

Every wh*te person who wants to be considered an ally and/or an anti-racist needs to read this book.