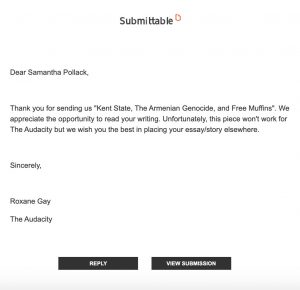 So, I’ve officially received my first rejection letter, and in light of the recent Freelancer Failure Ball — a charity gala dedicated to celebrating “failures” (which, I think we need to recontextualize what that word even means, and possibly just replace it with something less failure-y)—I decided to brag about it.

I didn’t tell many people about the fact that I submitted an essay to Roxane Gay’s publishing company. (Yes, THE Roxane Gay.) I only let my best friend & my husband read it; and they both thought it was great—but they would, wouldn’t they?

I was only half-expecting to be chosen. Most of the “emerging writers” I see have been previously published, and/or have their MFA. Their bios read a lot more impressively than mine. Which, yeah, imposter complex and all that… but still.

I haven’t read any of the essays that DID get chosen. Eventually I will, and I’ll set them against mine and see if I can suss out the differences. This is a good practice to engage in as a writer… but you gotta wait until the jealousy wears off, which is what I’m doing now.

It sucks to get rejected. But, I knew this day would have to come. *Every single writer* I can think of has been rejected—a lot. If you really want to do this, it’s just part of the deal.

Last weekend I heard Liz Giorgi say something like, “Your failures are representative of how much you believed in your ambitions.” (not an exact quote, sorry.)

I’ve been betting on myself this year, more than I ever have before. I’m sharing my writing and trying to get on podcasts and taking big swings by submitting to Roxane Gay and stalking Lindy West to see if she wants help editing her new substack project. (She hasn’t gotten back to me yet, lol).

It doesn’t feel good to get rejected. But it feels a hell of a lot better than not trying at all.

s/o to Jess Manyouzack for creating this space for us.