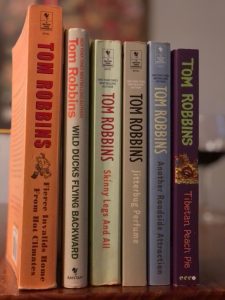 For a long time in my 20s and early 30s, I’d tell anyone who asked that my favorite author was Tom Robbins. I put it in my author bio. I emulated his goofy writing style in my job pitches. I even wrote him a fan letter once—the only time I’ve ever done anything like that.

My favorite Tom Robbins book was Fierce Invalids Home from Hot Climates. I loved everything about it—the characters, the Matisse connection, the magical, the mystical, the sacred & the inane. I still admire how much fun he had with words & sentences; how playful he was with his writing.

But I tried to reread it recently, and I hated it. 😬

The main character in that book is called Switters, and Switters is… well… a pedophile. He’s “in love” with his 16-year-old stepsister. He carries around her training bra from when she was 12 like a talisman.

As a young woman steeped in a culture that oversexualizes young girls and then slut-shames them for being too sexy… I’m not proud to say, I didn’t even register the pedophilia at the time. I thought Tom Robbins was fun & sex-positive.

But as a 43-year-old feminist… it was just disgusting. I can’t believe it got published. I look back and think… did *all* of his books oversexualize and/or infantilize women? Are all those “strong female characters” just some white dude’s pornographic fantasies? What did the 2nd-wave feminists make of Tom Robbins?

What do we do now, with our problematic faves?

I’ll tell you another author I was super into in my early 20s—Ayn Rand, long before she became the poster child for Silicon Valley tech bros. Her ideas are problematic in a different way though—she basically creates an argument in favor of the wealth gap, b/c some people are just “more special” than everyone else. Welp.

But in my early 20s, slinging cocktails for a sexist Jabba-the-Hut boss who harassed me daily—I was ALL ABOUT THAT SHIT.

None of us are perfect. There is no such thing as being “perfectly woke.” There’s a lot more to reckon with besides some problematic old books… but hey, this is where I’m at today.