How to Write Emotional Emails 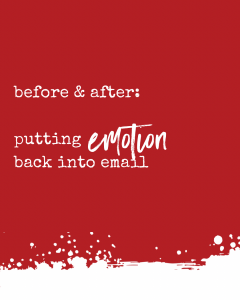 One of my least favorite sexist assumptions is that women are “too emotional” and therefore less effective at their jobs.

(First of all. The biggest, most immature temper tantrums I’ve ever witnessed have ALL come from men. *They’re* the dramatic ones. But… I digress.)

If you identify as a woman, you’ve probably encountered a certain type of advice throughout your career about how to communicate—

Basically, you take out all the emotion, because it makes you seem “wishy washy” and/or “weak.”

Get to the point, don’t sugarcoat it, don’t try to be ‘nice,’ don’t apologize, become a blank stare.

**This advice comes from both men AND women, by the way.**

Earlier in my career, I used to follow this advice to a T. I got high on saying no without an explanation, and firing clients at will.

And this led to me handling a client termination in a way that was super abrupt and unclear.

I was following the take-no-prisoners advice of my male & female mentors, who were advising women to “man up,” stand up for ourselves! and quit apologizing for taking up space!.

Like most accidentally misogynist advice, there’s a kernel of well-intentioned truth here. Women HAVE BEEN conditioned to apologize for taking up space.

How many times have you witnessed a woman who, instead of saying “Excuse me!” or “Behind you!” or “On your left!” says: “Sorry!” 😐

But swinging to the other extreme—not giving a shit about anyone else’s feelings—is not the answer, either.

We SHOULD give a shit about other people’s feelings. And we should honor our own feelings, too.

This is what it means to be kind. 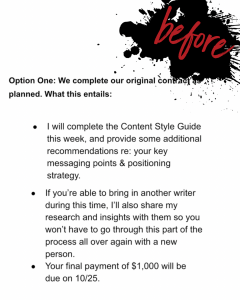 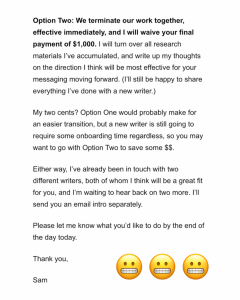 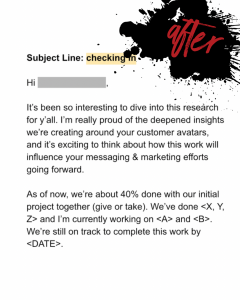 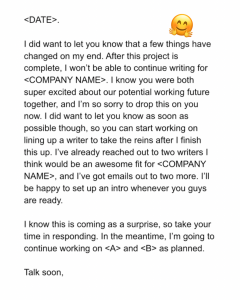 The difference between the first version and the second version—

In Email #2, I’m not giving any options. I’m just *telling* them what’s going to happen. But I’m also not punking out on the original agreement.

I’m still not really explaining myself, but I’m not lying either, but I’m also not being unnecessarily mean. “I won’t be able to continue” is the truth; but you don’t have to go out of your way to say it’s “not a good fit.”

In the first email, I basically was like, “I don’t like you guys.” LOL. In the second email, I’m more like, “this has been so cool and I’m proud of what we’ve done, peace out!”

Email #2 isn’t disingenuous, and Email #1’s still truthful. But if you were the client, which would you rather receive??