The Midnight Library by Matt Haig 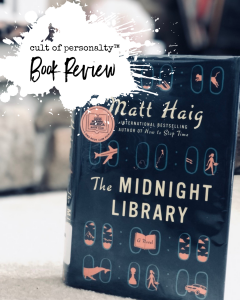 The Midnight Library was not what I expected it to be. I had a vague impression of something like Erin Morgenstern’s The Starless Sea—a sweeping, honey-colored literary fantasy—but it was quite a quiet and intimate little book.

I should also tell you, I cried my eyes out.

This is a book about the multiverse theory of quantum physics (a concept I am familiar with, by the way, because of The Dark Tower, Fringe, and LOST—and not because of anything I learned in school).

Upon the moment of your death, in that in-between time between “dying” and “dead,” you are offered an opportunity to try out all of the potential lives you could have lived. All the ‘what-if’s’ that haunt you; all the branches and twigs that sprouted from every random decision you made or didn’t make; all the versions of you that, indeed, exist simultaneously in the multiverse. Like Schrodinger’s cat.

The overall message is a surprisingly corny one when you say it out loud (very “It’s a Wonderful Life”), and everything I’ve tried to write about it so far feels like an empty platitude.

But it didn’t feel that way to read it.

Who doesn’t have regrets, or wonder what our lives would be like if we had done that ONE thing a little differently?

I regret not majoring in English, and not taking a semester abroad. I regret never having been to Europe. I regret telling my best friend I didn’t like her boyfriend… or, I regret how long it took me to see the cracks in our relationship. I regret most of the guys I ever dated or tried to love. I regret all the words I’ve never written, and all the work I’ve kept hidden from the world.

What if you *really* got the chance to live out all the different versions of your life, in which you did or didn’t do that one thing?

Here’s what would happen…

You’d have a bunch of other regrets and what-if’s. There would be weird butterfly effects you couldn’t have anticipated, and those might suck even worse than the things that suck now.

The specifics would be different, but the feeling would be the same.

I’m really grateful for this book.