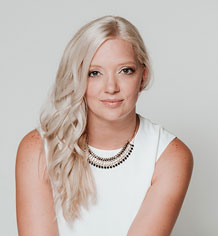 What’s Her Deal? Steph’s great at delivering consistent, well-written emails that are powerful and clear. But her email subscribers aren’t the same people who tend to purchase her main offer.

What’d She Need? A clear, intentional, Indoctrination Sequence to welcome new readers to her brand, address the things they cared about most, AND act as  a natural segue into the offers she created just for them.

In Order to Achieve That, She Also Needed… A reevaluation of her positioning, so we could home in on the right things to say to her people (and when to say them, and how).

What We Did: CoP Indoctrination Sequence + Secret Kool-Aid Recipe

Steph is like a Belvita biscuit with her email content — she keeps that shit regular. For as long as I’ve known her, she’s been churning out weekly emails that double as long-form Instagram captions, every one of them full of no-bullshit biz talk.

BUT. The people on her list (a.k.a. all those ❤️’s and opens and email replies) are a slightly different crowd than the people who typically enroll in her signature offer (long-term 1-1 coaching & strategy work).

THOSE people come to her almost exclusively through referrals.

So. For the past year or so, she’s been developing & refining some new offers that are more in line with where her readership’s at. Great.

And because she’s been doing this for a long time and is wicked smaht (or whatever they call it in Canada), Steph knows that people don’t just magically buy things because you made them and they’re awesome—they need a reason.

And that reason comes from creating an honest, consistent, thought-provoking, inspiring, human, maybe-a-little-funny conversation with them, from the moment they first interact with you.

If you want your readers to invest their money in you at some point, you need to invest in them first,

AND THIS IS WHY AN INDOCTRINATION SEQUENCE IS SO IMPORTANT.

In Steph’s case, she needed a  way to introduce new readers to her philosophy, values, and how she works, in a way that felt true to her voice (and not like a bait-and-switch).

When she first came to me, that’s what she asked for—an Indoctrination Sequence.

Why couldn’t Steph just write this herself, given her excellent track record with regular content creation?

Because—a sequence like this requires more strategy, planning, and organization than the one-off thoughts you dictate to Siri while you’re making the kids’ lunches for tomorrow. It needs to be built around a singular, foundational theme, and carefully designed to keep the reader interested 6 emails in, which is no small feat.)

Based on our initial conversations, I felt we needed to take a fresh, nuanced look into Stephanie’s brand as a whole, and where she fit into the larger landscape . This recommendation was based on a few different factors—

The best person to do this type of analysis, by the way, is NOT YOU. You need an objective, outside-looking-in perspective, who can evaluate where you stand in your industry without bias.

I read every intro and exit interview she’d ever done. I lurked in her Facebook group. I read her old emails and Instagram posts. I researched her top competition—both direct competitors (people she might lose actual business to) and perceived competitors (people her audience might look at instead, even though they offer different things.)

I pored over ALL the branding work she’d ever done (and holy hell, it was a lot. Thankfully, it was color coded, because that’s how Steph rolls).

And what I found—what made me feel that electric, zing! That’s IT! excitement, was this—

All of Steph’s happiest, most successful clients identified as either highly sensitive people, introverts, or creatives, or some combination of the three.

WHAT they valued—her decades of experience, her infinite understanding of systems, her no-bullshit focus on what to do next and why (as opposed to spending months on mindset stuff)—she’d been right about all along.

But WHO they were, and WHY they valued those things—that wasn’t being addressed in her existing messaging as clearly as it could have been.

This wasn’t exactly news to Steph; she knows who she works with. But it’s like… those people found their way to her like moths to a flame. That’s just who she was attracting, by doing her thing and being who she was. It wasn’t necessarily intentional or premeditated.

So what would happen, I wondered, if we deliberately went to where all the moths hang out, and lit a candle right in the middle of their cave?

To put it in boring marketing terms, you’d draw more of the exact type of person you worked best with, right into the top of your funnel.

This was a bit of a revelation for Steph.

It didn’t necessarily inform her Indoctrination Sequence directly—that content was already woven through her existing content (more on that later.)

But it DID shift her positioning from the inside out. As she grounded herself in this notion—“I am the coach for introverts, creatives, and Highly Sensitive People (HSP’s)”—it affected how she carried herself. It changed the conversations she was having with potential new clients. It changed the way she talked about her work—in interviews, in her emails, on Instagram.

And now, she’s leaning into this, leading with it, becoming known as THE strategist for this type of business owner.

Next Up: The Indoctrination Sequence That Doubles As Your Opt-in

The great thing about Steph’s business model is that the foundational framework in which she operates is already designed around something she calls the Six Pillars.

Six Pillars, six emails. I love it when a plan comes together.

Our original idea was a little less linear; we thought to build it around the most ubiquitous misconceptions and false beliefs around running and growing a successful business.

It was loosely organized around the Six Pillars, but it didn’t have a central, unifying idea, and it just didn’t feel super compelling.

Then I watched a webinar she’d recently done as part of a launch. (I do that a lot, by the way—watch your webinar replays, FB Lives, Instagram Stories, old training videos, etc., to get a feel for how you carry yourself and the language you use to talk about what you do.)

She was so articulate and inspiring when she went through the Six Pillars. It had that magic I look for, when a business owner gets wayyy into the thing they’re talking about, and they’re on a roll, and it makes so much sense, and you can see it in their face and hear it in their voice—it’s resonant.

Arranging the whole sequence around the Six Pillars felt a LOT better (and clearer) than what we’d originally planned. It felt like it wanted to be written into a 6-day mini course, which is another thing I look for when I craft a new sequence.

This approach felt more consistent with what people want from (and value about) Steph—clarity. Action. Forward movement. NOT, for example, spending six months (or six emails!) talking about their feelings.

So I pitched this idea to Steph: Let’s turn this into a 6-day mini course, with each email focusing on 1 of the 6 pillars, and daily action steps they can take associated with each one. At the end of every email we’ll ask the reader to reply and tell you how they did.

She loved it, because it was the perfect segue into these new services she’d been developing. Which meant that when she WAS ready to start offering that to people, it would feel like a natural extension of the same conversation. Win.

And bonus, it made her email opt-in copy SUPER easy to write: 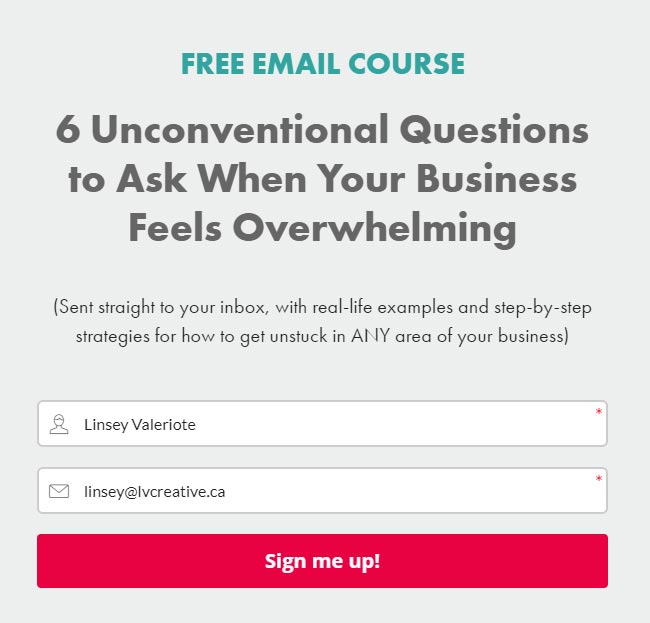 I wrote all six emails based on material I mined from that same webinar. Each email strikes the perfect balance of giving the reader an actual THING TO DO, a chance to experience that forward-movement feeling right away, while keeping them stoked to learn more.

As soon as she had this sequence implemented, she started receiving replies like: